Delighted to win the prestigious title: 2018 Auckland Photographer or the Year by the New Zealand Institute of Professional Photography! The award goes to the Auckland and Northland NZIPP member with the highest accumulated score from their four top prints in the annual NZIPP Iris Professional Photography Awards. Held in Wellington this year, the Iris Awards is New Zealand’s only professional photography competition. The aim of these print awards is to recognise and honour the best in contemporary photography from New Zealand and overseas. The awards showcase cutting-edge imagery and top, creative photographic talent. They celebrate the excellence, providing a platform for recognition within the industry and the wider public. The event also raises the profile of photography throughout New Zealand, providing an annual showcase of superb imagery and creative photographic talent. It provides an excellent opportunity for photographers to gain widespread exposure for the fruits of their creative efforts. The Iris Awards are open to all photographers in New Zealand and to members of approved overseas professional photography organisations by entering up to 10 prints across a range of categories. All prints are judged in an open forum over a three-day period, the best of which are awarded gold, silver and bronze awards.

Here is a collection from Ilan award winning prints:

Cracked
“It took more than two hours to apply the paste onto Alicia when small pieces started falling apart. I love the sad look in her eyes!” The two each other online and began brainstorming ideas for a portrait photograph that was ‘timeless’. “I loved the idea of applying a mask onto her face and extending it to her torso. The idea was to create a cracked earth background using drought as the theme”, Ilan says.

“We actually first discussed doing something quite elaborate but the more we talked the more it developed into more of a personal piece”, Alicia comments.

Collaborating with someone else is always a risk Ilan states, it may not always work out the way you envision it to.  After finding a potential model, the next challenge is to ensure that there is a shared vision. “We plan, we talk, we think about the outfit, about the theme. We talk about what the model is comfortable doing etc. The stars have to align too… The model and I have to be on the same wavelength and if they bring an idea that I think works then together we’re a great team.”

Ilan and Alicia both stress the importance of having an open mind when it comes to collaborating with someone, particularly for a creative project. “It’s difficult to add anything new to the creative space without honesty because it allows our unique selves to come through”, Alicia says.

Ilan focuses on monochrome portraits that allow the subjects to really shine in their channel of storytelling.  His portraits often involve “ordinary people”, posing nude, which opens them up to a new sense of vulnerability and allows the audience to focus on the bare elements. “Most people stay hidden behind technology these days and lose that special human connection with each other so it’s a real art to work with people and bring out that magic in them.”

In a world overloaded with information and sensationalistic “visual clutter” which are competing for our attention; Ilan states that his goal is to create pieces that distinguish themselves as “extraordinary” “Forgetting the technicality of the picture, you really need to ask yourself, ‘is there a visual statement? Does it have any emotional impact?’”

Alicia agrees, “There are plenty of photos out there, of women especially, who try to look how they think they should look when in front of a camera due to the huge pressure on us to look a certain way. So the idea of was to try and work against that”. 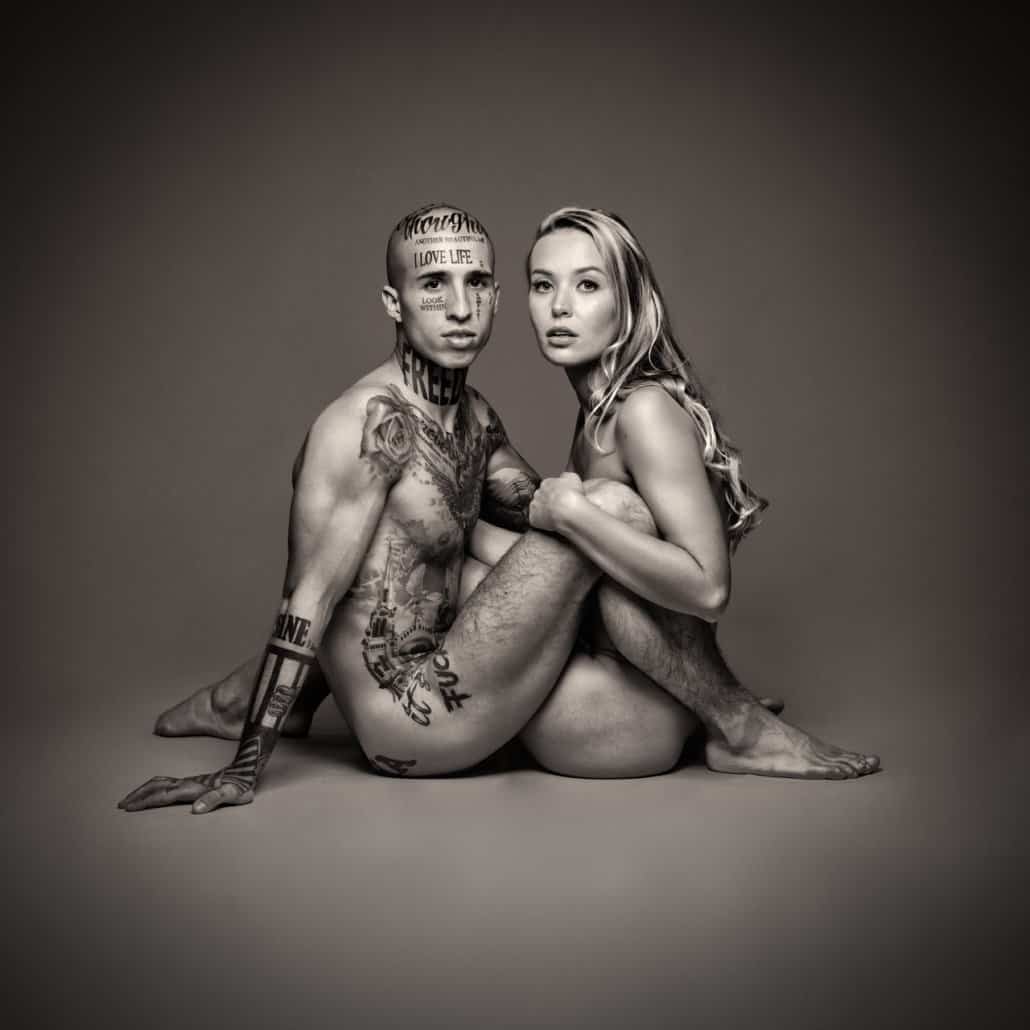 Beauty and the Beast

I met Catalin and Elena at the Takapuna Sunday market and this is the result!
Catalin’s message for life is written on his face – and his head – in Times Roman: “another beautiful day”, his first face tattoo, on his forehead, beneath “watch your thoughts” in large italics, circling his shaven head.

Below his right eye, a clearly defined “look within” contrasts with a vertical “un-comfort” running from above the left eye down his cheek but divided by the eyebrow.
And the word FREEDOM is highly visible around his neck. His message is “it doesn’t matter what you look like. You don’t have to impress people. Look within yourself. Respect each other. Don’t give up on dreams”. He dropped out from school at 17, having developed depression because of back injuries.

By the age of 18, he began using alcohol and drugs, because “that was the message in the media”. At 21, he decided to run away from his problems and went to Australia. There he was arrested three times and collected minor convictions for bad behaviour.

Then “it all changed”. He left behind his bad associates, stopped using alcohol and drugs, and focused on “being the best I could be, every day”. His mission is to “inspire and motivate teenagers and young adults to make wise decisions, stay on the right path and never give up on dreams”. Convergence
“I photographed this beautiful underpass of two merging lanes in Vancouver. The bird is not really a lucky coincidence, just some creative Photoshop.”

“I met young Riley and mum at the Radiology clinic and said that he should be a model! Bronwyn called me about six weeks later and I met them both at Wow Photography studio – this is the result! I love his innocent and confident eyes, his beautiful hair and the way his fists grab the large hammer – simply classic!

“I met stunning Kaitlin at an old barn. We set up her stags on the wall and the skins on the floor. Kaitlin posed beautifully with one foot on the horse saddle which I purchased three days earlier at the Takapuna Sunday market. Kaitlin is a body builder and a hunter, the dog’s photo was created in my studio.“

“This is life-size sculpture of Jesus Christ with his hands tied behind his back which was placed at the entrance to St. Paul’s Cathedral in London. Most people think that this is a real person – that is really cool! I love the leading lines and the majestic arches with the massive columns on both sides!” Trellick Tower ©Ilan Wittenberg
Trellick Tower is located on the Cheltenham Estate in Kensal Town, London. Opened in 1972, it had been commissioned by the Greater London Council and designed in the Brutalist style by architect Ernő Goldfinger. “I waited for the right formation of clouds to enhance the tower’s gritty and ominous look. I love the leading lines and the texture of the bare concrete!”